D&L Sitework , Inc. (D&L) founded in 1999, has grown into one of the most reputable general contractors in the Carolina's. Their work covers a wide range of state, commercial, and residential projects.
Lawton Hood, head of the estimating department, discusses his rapid progress from 'new user' to building machine control models, operating drones, and acquiring Ph.D. level skills when creating templates. Estimator Jacob Johnson supports Lawton and talks about his drone experiences.

D&L Sitework is relatively new with AGTEK, what path brought you here?

Lawton : In March 2019, we switched to AGTEK from another program because of accuracy issues when vectorizing and working with CAD files. We were spending a lot of time drawing in data that we should be able to pull in. Other contractors used AGTEK, so we made the switch. The difference was like day vs. night, in my opinion. Our rep "Donnie" trained us, and in a short time, we were comfortable with dirt takeoffs. Within 6 months, we were running templates, and we are now building machine control models from CAD files, which is really neat.

Lawton, you have rapidly moved from ‘new user’ to building advanced templates in the Materials module of Gradework. Share for our readers what you have done, and why.

We wanted an idea of how many man-hours it takes to install storm drain, silt fence, or similar things, to be aware of those costs when we bid. In the Materials module, I created a list of materials required for every structure and set up formulas that approximate installation costs/time based on real-life parameters. So, say, for example, that we install a storm drain utilizing a 36" pipe. Utilizing my templates, I now input the linear length, and the formulas calculate:

• The tonnage of 57 stone bedding needed if applicable

Lawton demonstrates the model for a 900-foot run. It calculates the quantities shown in the image and reports that a little over two days’ labor is required - which Lawton confirms aligns with real-world experience. "Should we win the bid, all this data is available to the field, which means we can spot measure areas and get a feel if we are using the right amount of material on-site and staying within budget. Setting this up for all material sizes definitely tested us!" 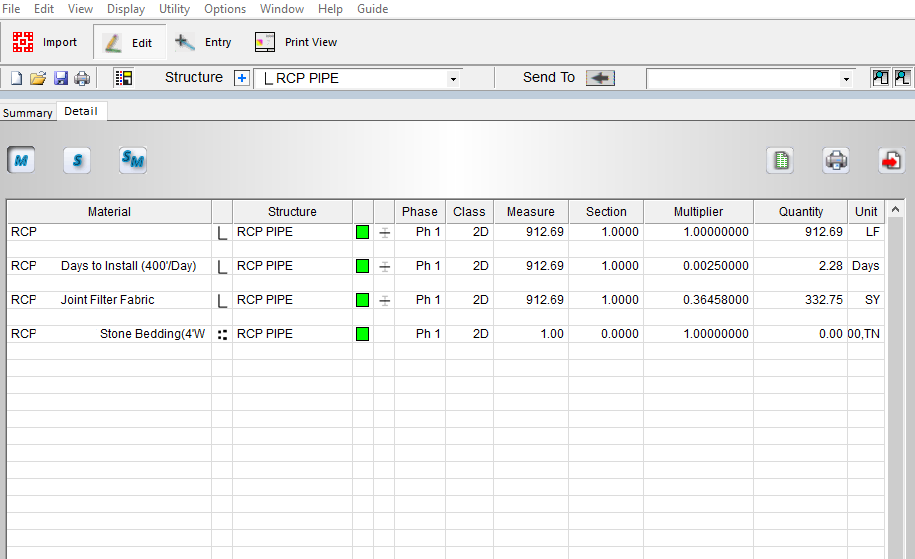 The same year you started in Agtek, you introduced drones into D&L’s workflows. What has been your experience adopting them?

Lawton : We purchased the DJI P4 RTK drone in August 2019, did training with Matt Hassett from AGTEK, and pretty much immediately started on a project. In the beginning, we didn't know what was going to come of it. It was a big eye-opener.

Jacob : Yes, there was a project that had some mediocre material that needed time to dry out before we could finish the job. When we returned and flew the drone for the first time on this site, we found a grade bust that showed a significant difference between the Existing Ground vs. the provided topo that we bid off of. The site now required an import of about 5,000 yards. We were able to use this data to negotiate a change order with the GC to be compensated for the additional work.

Another job we flew, the topo was not very detailed at the bottom of an existing pond, and the site had an unaccounted-for stockpile. We estimated we needed to haul away 30,000 yards of material based on the original topo, but the drone flight showed reality was nearer to 90,000 yards. We are in discussions with the developer on how to handle it.

The drone has paid for itself many times over. It took us a few months to grasp setting up flight plans, figuring out our process to get ortho's and point cloud data through Pix4D and into AGTEK, and organizing the data chronologically within Agtek, but the pay-out has been more than financial:

• KMZ's help our communication with developers because they can visualize the progress or issues that may arise on site.

• We can quantify how much dirt is left to be moved on a job and validate the cut/fill the areas. This helps to adjust our workflow and improve efficiency.

So don't let the price of drones phase you because they pay for themselves. 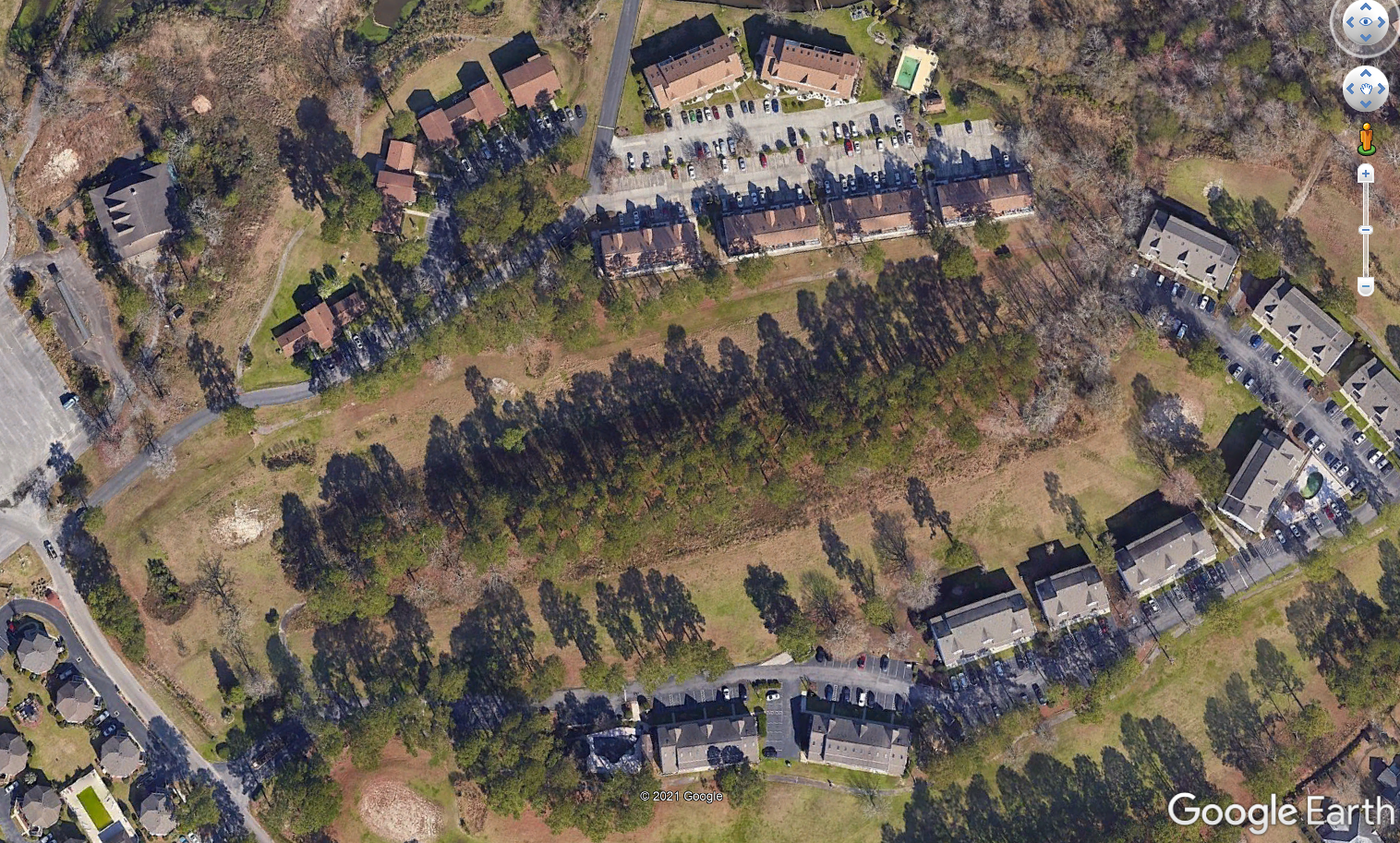 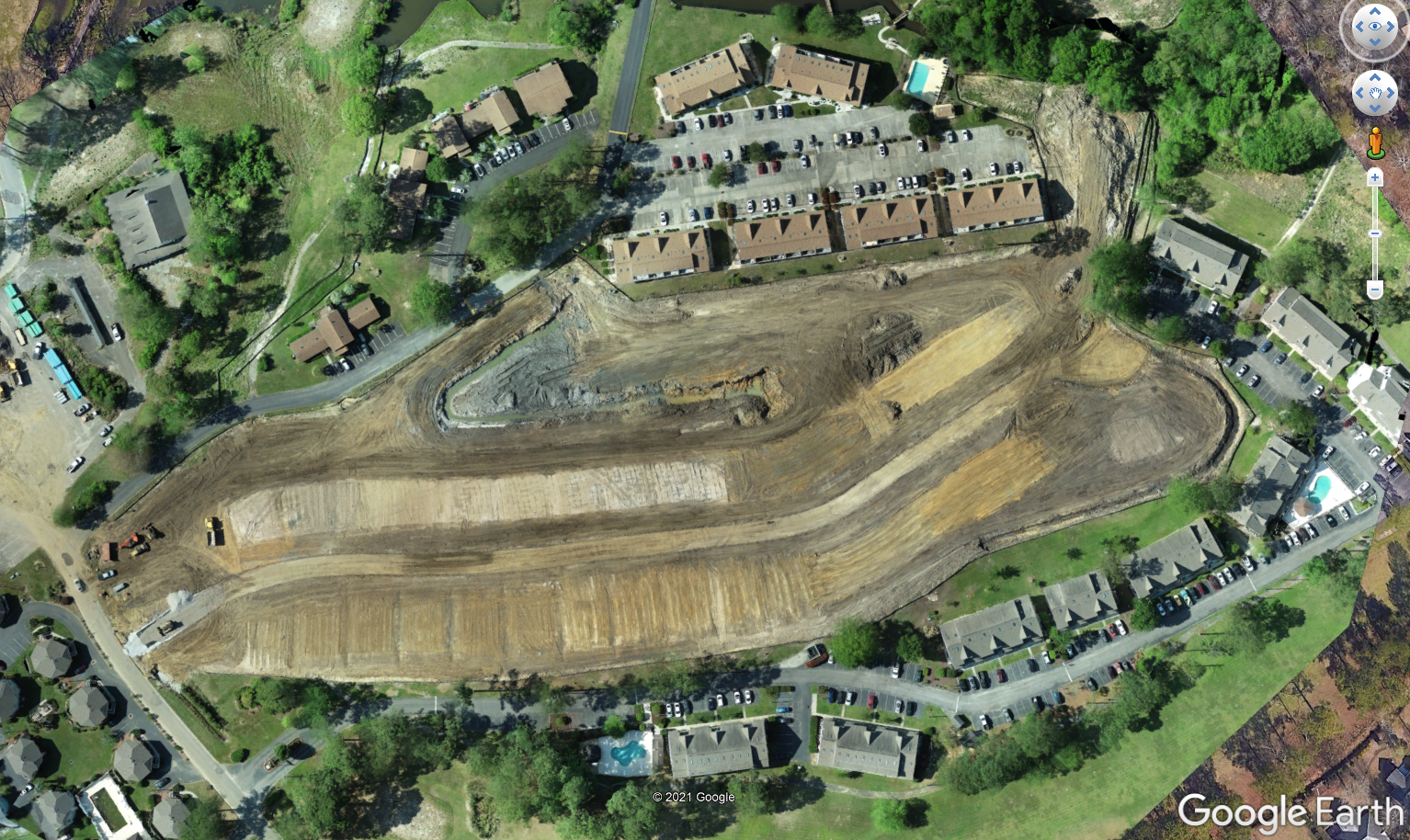 You mentioned machine control. What hurdles have you over-come to get it working?

Lawton: We have recently started building machine control models. I couldn't do any of that before, and we've had "trial and error moments," but it's definitely neat. A challenge was figuring out to use point labels (instead of line labels) and getting my points within my lines at equal spacing. After figuring that out, things started to come together.

We utilize the 3D view to anticipate how the machine will react to the model. We verify that break lines are not too steep, or the surface isn't going off in strange directions. When the 3D view is clean and accurate, the dozer operator sees pretty much the same thing out in the field. We needed to improve linework colors to make models easier to read on the screens in the machines. Otherwise, machine modeling feedback from the field has been good. t prevents having to come back and re-grade an area that is 4 tenths low (or high). So, we are getting good at hitting grade the 1st time, and moving on. 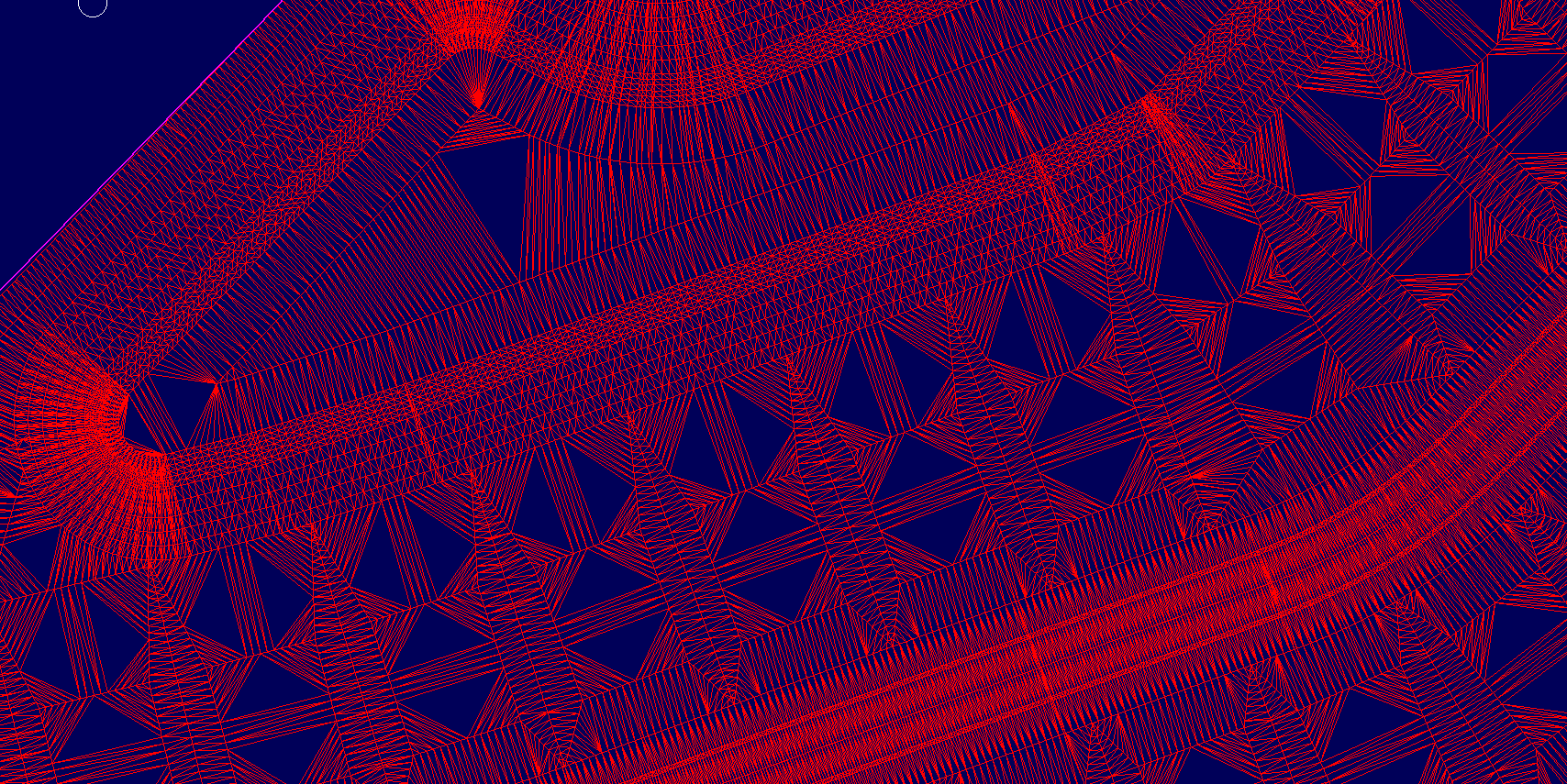 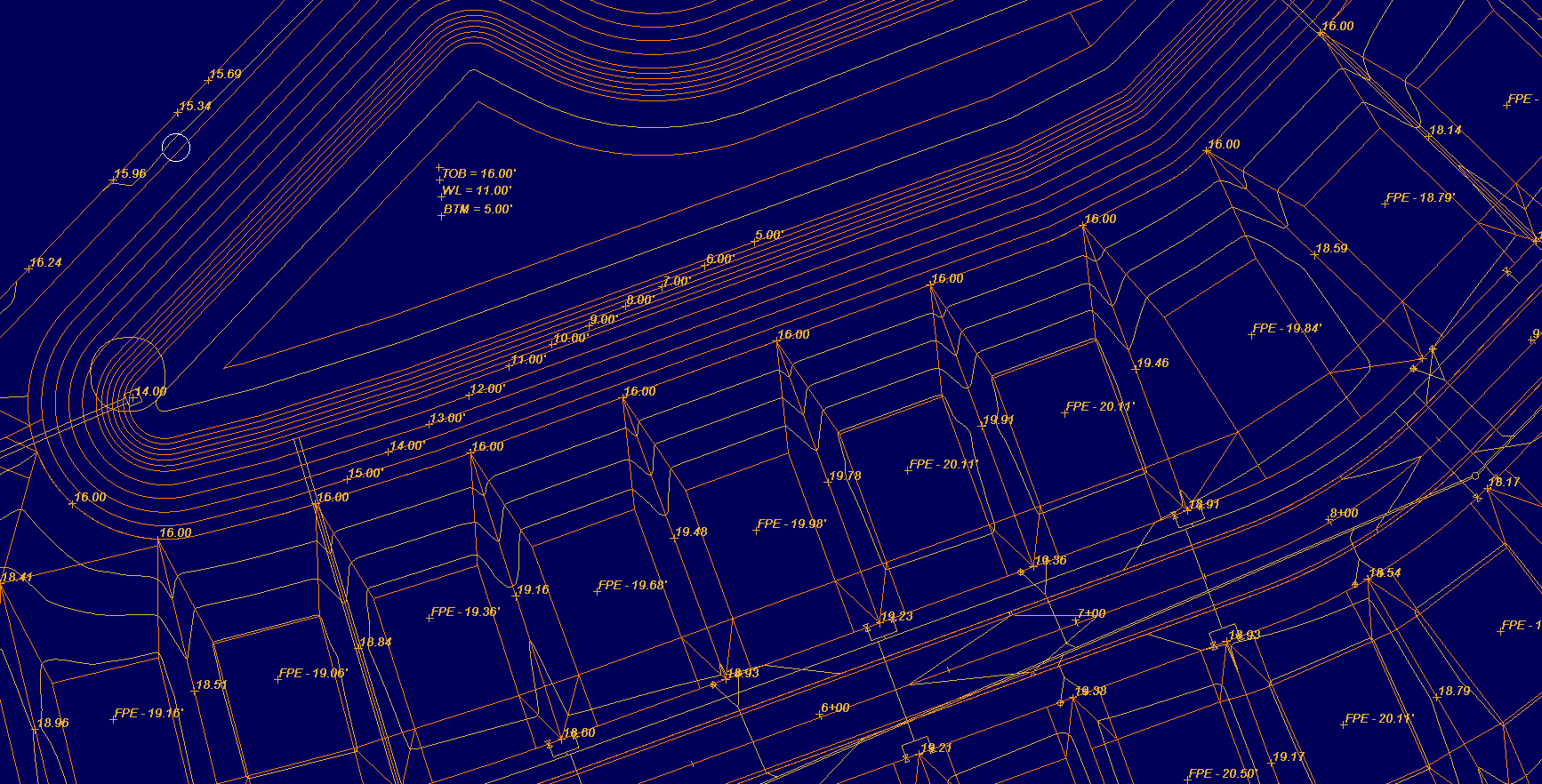 Any advice you want to pass on to other new AGTEK users?

Jacob: If you are utilizing drones, make time to pull yourself out of the office. I am trying to get on sites about every two weeks. But I am still an estimator and I must still be here to bid on new projects. Making time is a real effort. But we have learned the pay-out is huge.

Lawton: On the topic of drones, if you had a lot of rain and the site is saturated, I recommend you let the site dry because drones don't react well to water. Shallow puddles are ok, but roughly an inch or more of water really affects the data. I have to clean points that are 400ft higher than the rest of the site. Drones don't like water.

Also, take the time to memorize keyboard shortcuts from the beginning. It is far more efficient. And watch the videos on AGTEK's website to learn templates. It's a time investment, but once you have mastered templates, you can do anything in the program, and the pay-out is big.

Want to learn more? Contact us and we will be happy to help.